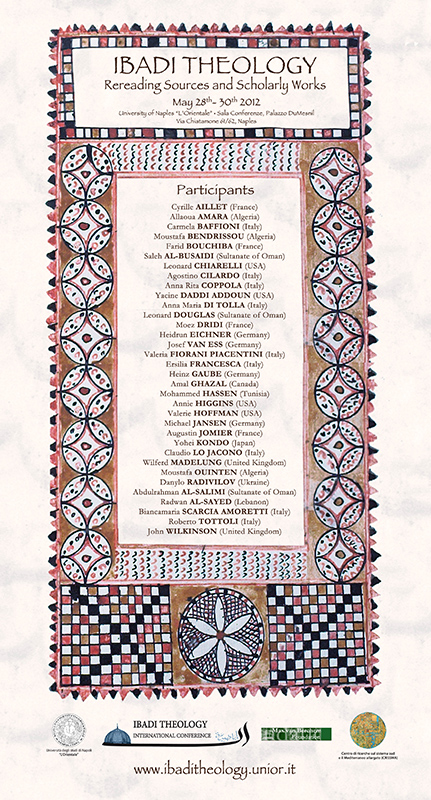 The aim of this conference was to explore different issues of Ibadi theology from the early beginnings until the present day. It focused on the formative period of Ibadi theology, the transformation period and the theological discourse.The Ibadis are a moderate branch of Islam. At present they form the main part of the population in Oman, in the oases of Mzab in Algeria, of Zawara and Jabal Nafusa in Tripolitania, on the island of Jerba in Tunisia, while small groups are found on the island of Zanzibar and on the East African coast.

Ibadi Islam emerged in the early Islamic period and played a pivotal role in the development of Islamic law and theology. Today, it continues to be an influential force in the contemporary Middle East and North Africa. Despite its long history and its vitality, Ibadi Islam has often been misunderstood and remains little known.

The conference aimed at redressing this gap by introducing the distinctive theological teachings of this influential Islamic school to a broad public, specialists and non-specialists alike.

Since the beginning of last century, Ibadi theology has attracted the attention of Italian scholars, most of them based at the University of Naples “L’Orientale”. The pivotal works by Carlo Alfonso Nallino, Laura Veccia Vaglieri, Mario Martino Moreno and Roberto Rubinacci opened the way for a better understanding of Ibadism, but interpretation still remains essentially open and Ibadi studies still deserve much more attention.

The history of Ibadism in the first six Islamic centuries is essential for understanding the evolution of both religious institutions and practical law in the Muslim world. The Ibadi doctrine may have originated among the eastern Ibadis in Basra and was transmitted thence to the West as a result of the intellectual contact between eastern and western Ibadis. Ignaz Goldziher and Carlo Alfonso Nallino pointed out a Mu’tazili origin for the early Ibadi doctrine whereas Montgomery Watt argued in the opposite direction. When and where such influence made itself felt is a question which has not yet been settled.

The conference dealed with a series of cases, from different periods and different sources: using an interdisciplinary approach, speakers addressed questions such as dogma and creed, conception of faith, theological controversies, reassessment of theological sources, the Ibadi “modernism” in last century Oman and North Africa.

Keynote speakers, who discussed crucial question concerning the Ibadi theological discourse and the construction of the Ibadi identity, opened the morning conference panels. A lively debate among all the speakers and experts in the field on the future of studies in Ibadism stood at its close.

The conference proceedings was entirely edited in a high-quality publication. An international scientific board was in charge of the conference organization, the selection of participants and the critical reading of the papers.

The conference was held under the auspices of the University of Naples “L’Orientale”. It was also supported by grants of theMax van Berchem Foundation (Geneva) and of the CRiSSMA (Research Centre on Southern System and Wider Mediterranean – Università Cattolica del Sacro Cuore, Milan).